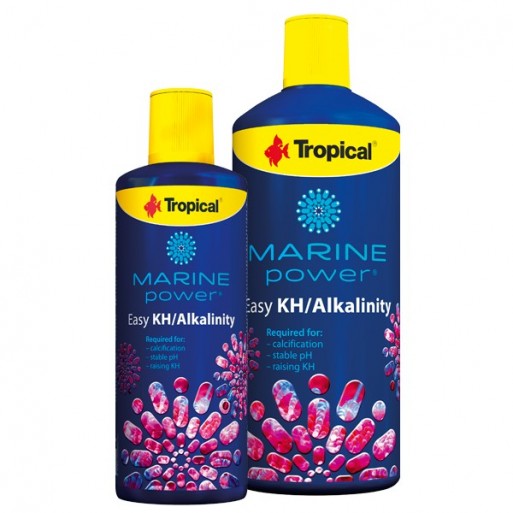 MARINE POWER EASY KH/ALKALINITY is required to raise the level of KH – alkalinity (bicarbonate level) in a marine aquarium.

MARINE POWER EASY KH/ALKALINITY is required to raise the level of KH – alkalinity (bicarbonate level) in a marine aquarium. Its formula has been designed for smaller tanks occupied mainly by soft corals. The active element of the product is a substance that increases the alkalinity of water. The product also contains small amounts of potassium, iodine and fluorine.

The importance of KH in marine aquarium:
KH (alkalinity) is one of the most important parameters of the salt water in a marine aquarium and it depends directly on the level of bicarbonate anions (HCO3-). The higher amount of these ions in the water, the higher KH. Bicarbonate ions play important roles in stabilisation of the pH level of sea water, which is almost constant in nature. Unfortunately, in home aquaria, pH is subject to daily fluctuations caused by low levels of KH. Bicarbonate ions are also the main source of building material for coral skeletons, the basic component of which is calcium carbonate CaCO3. It is thanks to the appropriate level of KH (bicarbonates) that corals grow.

The optimal level of KH:
The alkalinity of reef coral waters is about 7 dKH. In majority of home marine aquaria, a stable level of 7-10 dKH should be maintained. It is not recommended to raise KH too high, because it can be dangerous to LPS and SPS corals, and also negatively affect bio-filtration processes.

The use of MARINE POWER EASY KH/ALKALINITY:
In a healthy marine aquarium the level of the bicarbonate ions (HCO3-) is constantly decreasing, mainly due to the consumption of calcium carbonate during calcification process. Carbonates are consumed not only by stony corals (SPS and LPS), but also by molluscs (snails, bivalves) and coralline algae. The loss of bicarbonate should be regularly supplemented with MARINE POWER EASY KH/ALKALINITY. Consumption of HCO3- depends on many factors, such as: water temperature, lighting, type of stock in the aquarium etc., and their level requires regular control. To determine the level of KH, we recommend MARINE POWER XACT TEST KH/ALKALINITY. With the test you can easily determine the current level of KH and its loss, e.g. during the week.

Determining the average daily loss of KH:
If mainly soft corals are kept in the tank, the daily KH loss may be small and may be different every day, therefore we recommend calculating average daily KH drop (bicarbonate consumption). To determine that, two measurements of KH should be made with an interval of 4-5 days. It is important that both tests are made at about the same time of the day and that water changes (if done every week) are made at least 24 hours before or after the tests. This way, they will not affect the results. In a healthy aquarium the first KH score should be higher than the second. Then we subtract the second result from the first, and divide the obtained value by the number of days (minus 1), between the two tests.

Example:
Day 1: KH = 8.5 dKH
Day 5: KH = 7.5 dKH
KH drop = 8.5 - 7.5 = 1/4 days = 0.25 dKH per day
The result tells us by how much the daily KH supplementation should be increased. If the result is negative or equals 0, KH supplementation is not required. Please remember that consumption of bicarbonates will change with the growth of corals and other invertebrates in the aquarium. Therefore, this process should be repeated every couple of weeks.

Dosage:
The dosage of MARINE POWER EASY KH/ALKALINITY depends on the daily KH loss. One full cap of the liquid (about 20 ml) will increase KH by approx. 0.53 dKH in 100 l of water. Dosage for larger tanks is presented in the table.

The contents of the cap should be added into the aquarium near the circulating pump, so the liquid will be distributed effectively in the aquarium. In case of higher consumption of bicarbonates, we recommend our MARINE POWER ADVANCED KH/ALKALINITY. Due to the potential stress the inhabitants of the aquarium, the daily increase of KH should not exceed 1 degree dKH.

Note: Excess and deficiency of bicarbonates (KH) can be both harmful to marine invertebrates, so you should regularly check the level of KH in the aquarium.